Interview with Nicholas Schuerhoff, climate impact analyst at right. based on science

Are you a good guy or a bad guy in terms of climate change? A degree Celsius number (°C) can give you the answer. Right. Based on science has developed a model, customers are able to analyze their climate impact within line with the Paris agreement. With Nicholas Schuerhoff, climate impact analyst at the young company based in Frankfurt we discuss how you translate a company’s climate impact into a concrete, tangible number and why climate protection is increasingly becoming a financial question for companies. 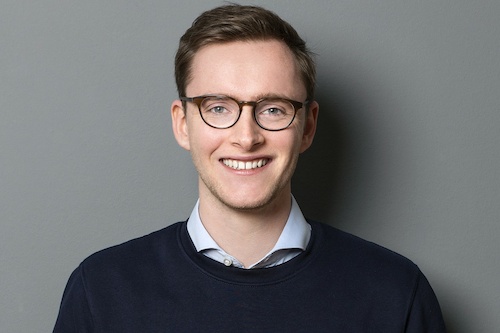 Nicolas Schuerhoff, climate impact analyst at right. based on science

Nicolas, before you worked for right. based on science, you did an internship at Lufthansa and the Environment Management Department. And with work, your perspective on climate change got a new twist, didn't it?

Yes, I was always interested in how large companies like DAX companies actually deal with environmental issues within their organization. Through my research that I did at Lufthansa, I encountered a new view on climate topics within the corporate context. And this view was all about perceiving climate change as a risk to your business. I found that so interesting that I wanted to learn more about this and wished to work with a company who wanted to make these risks transparent. That's why I joined right about two years ago.

So your personal motivation, but also the general change you're describing, is to look at sustainability, not through a Corporate Social Responsibility perspective or because consumers demand it but because it really is a fundamental financial or economic risk for the company if it's not being tackled properly.

Yes, exactly. And I also think that this language resonates way more with upper management at CEO level. It just has more weight than an ethical or moral discussion. Once you start attributing a financial value to those risks or opportunities, they may also be opportunities, the attention changes a lot and you really get the management attention that this topic needs.

How are you able to capture the full climate impact the company has and then translate it into a concrete number that gets you the attention of the management board?

The numbers you usually work with in the Environmental Sustainability Department are very abstract. You're talking about tons of CO2 emissions or CO2 equivalents, which is even more cryptic. And nobody can really tell, well, 30 million tonnes of CO2, is that a lot or not? It's probably a lot, but you don't really have the context to put it into a bigger picture. What we aim for with our XDC model (X-Degree Compatibility) is to translate such figures into a more tangible number which businesses, consumers or politicians can understand which is the degree Celsius number. That's essentially what we do with our model. We translate the emissions accounting of a company into a degree Celsius number, which puts the climate impact of a company in a context that is easier to grasp and has a whole different psychological effect as well.

So eventually you present a very simple number that also has some emotional value. Please tell us a little bit more how that process works from getting the data that the company provides, feeding it into your model and breaking it down to a very simple to understand number.

Basically the XDC model works with two parameters, the emissions of the company and its financial performance, the gross value added. We put those into relation and calculate an emission intensity. That emission intensity tells us how many emissions a company needs to generate one million euro of gross value added. That's the first step that happens in the model. You're always starting at the company level with those two parameters. In the second step, we scale this emission intensity to the entire world, essentially. So we're looking at how many emissions would be released into the atmosphere, up to 2050, if the entire world operated like the company that we're looking at. And then in the third step, we use a climate model. This climate model calculates the resulting degree of global warming from the emissions that have been released into the atmosphere up to 2050. That's the really important part where also our deep connection to climate science especially comes into play, this degree Celsius (°C) number. So it's a real degree Celsius number instead of a score or a rating.

At the moment we're aiming to keep the global warming below 1.5 °C. Probably we're going more towards like 2 °C. If things really go south and we don't react fast enough, we end up with something like 4 or 5 °C. Your model allows a company to position itself in that context. Is my company helping to achieve a global warming below 2 °C, or is my company more or less working on a world that has 4 to 5 °C of global warming, which means, am I a good guy or a bad guy? Right?

Yes, exactly. We have this universally agreed upon target in the Paris Accord. With our model, we use the same language. Obviously, when you make this calculation for a company, you always need to consider the sector that company is operating in. So obviously not the whole world is as Lufthansa or an energy company. So you always need to put those metrics into context. So context being the sector, but also the targets which are specific for the sector that a certain company operates in.

What kind of response do you get from companies? If I was in management of, for example, a not so climate friendly company, I would really not want you guys near my company because the numbers that you bring up might not be very pleasant. So how do you approach companies and how do they react to you?

This is an interesting question because you might expect companies to be really shocked or maybe even angry about those figures. But most of them already have a feeling that their performance might not actually be the best. Still, it's really interesting to see that in an actual number in the end, and some of them are shocked by the difference towards their competitors, for example. That's the reaction we've had quite a lot in the past. But looking at the individual figures of a company, they're usually like, OK, this is not a good number. We're obviously not going to communicate this. But now how can we reduce this? And that's also something that we offer with our analysis. So we determine emission reduction pathways that would allow the company to meet its target. I think something that we have been quite successful with in the past is, that we do not use those numbers to accuse companies, but to rather give an objective analysis. It's not something that we use to increase pressure on companies. It's a tool that we want to give to companies, to have more transparency about their climate impact and to take effective measures to reduce it.

Apart from maybe wanting to compare yourself to direct competitors, how real is the threat of actual financial losses, if I don't act on decarbonisation?

It's hard to tell in the short term. I think what we've seen in the past increasingly is that this whole ESG topic attracts way more investors interest. So ESG is something you find on the first few slides of a company's quarterly results presentation instead of being somewhere a footnote at the end.

What does ESG stand for?

ESG stands for environmental, social and governance. Climate change, climate friendliness, environmental friendliness are a part of it. This topic gained a lot of traction with investors as well as consumers in the past few months. The reporting and disclosure requirements are steadily rising. So investors are increasingly asking critical questions and companies need to be well prepared for that.

I would like to hear your personal opinion about how much weight is there really behind this momentum that you just described. Large corporations like Microsoft announced very ambitious offsetting goals. And then you see the “dirty companies” really facing much more pressure like Shell being forced by a Dutch court to significantly reduce their emissions much more than they had originally planned.

I think a few years ago, nobody would have thought that this is a realistic scenario, that a company, a non-state actor, is actually obliged to reduce its emissions in line with the Paris agreement. That's really a landmark ruling. And I see the risk of such climate change litigation increasing over time. So here we really see that the climate impact of a company, Shell in this case, is a risk to the company itself because it's a risk due to litigation. It's also a reputational risk towards consumers. This is also an area of application for the XDC model. Companies being able to demonstrate and express their climate impact in a degree Celsius number is a very transparent approach to report on your own climate impact.

This interview is an excerpt from an episode of The smarter E podcast. You can listen to the full interview with Nicholas Schuerhoff here .

Would you like to learn more about how your company can become climate neutral or at least reduce its energy requirements and emissions? Then visit our "Climate-Neutral Companies" topic page .

Interview with Boris Palmer, mayor of Tübingen, on the target of climate neutrality

Interview with Wolfgang Saam, Director of Klimaschutz Unternehmen e. V. and Prof. Jens Hesselbach, Head of the Department of Sustainable Products and Processes (upp) at the University of Kassel

The Path to a CO2-Neutral Company