How Can e-Cars Help Solve Our Electricity Shortages in the Future? 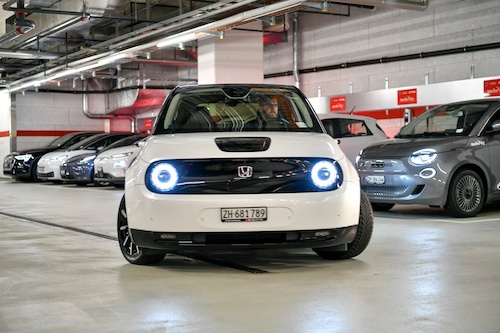 The car-sharing company Mobility is testing how e-cars can be used as electricity storage units. They are intended to help close electricity gaps and increase grid stability by feeding electricity back into the grid when they are not being driven.

In Switzerland, the first major technology test, "V2X Suisse," started a few weeks ago with dozens of electric cars as potential power banks. For a period of one year, 50 electric vehicles are to feed electricity from their batteries back into the power grid when they are not being driven. "V2X Suisse" is said to be the first large-scale test with bidirectionally charging electric cars. This should enable findings from different conditions - both in rural and urban areas.

Seven companies led by the car-sharing company Mobility are backing the project, including the car manufacturer Honda, the Swiss Federal Institute of Technology (ETH) and the Swiss Federal Office of Energy (SFOE). If the entire Mobility car fleet of around 3,000 vehicles were equipped with the appropriate technology, parked vehicles could combine to form a large energy storage facility, similar to a reservoir. This would allow distribution network operators and households to draw electricity from the electric cars at peak times, while they could be fully recharged during the day - for example, when the sun shines - at a cheaper rate. Over the next few weeks, Mobility is equipping 40 locations with 50 "Honda e", which can charge bidirectionally at about 20 kW. Among other things, the companies want the test to gain experience in terms of technology and regulatory challenges.

By the end of the project at the end of 2023, the seven partners of V2X Suisse want to explore how this technology can stabilize the power grid and how sites with photovoltaic systems can optimize their own consumption. They also want to investigate the business potential of bidirectional vehicles in Switzerland. And thirdly, competition between potential flexibility buyers (Swissgrid, distribution grid operators and interconnection for self-consumption) will be tested. The project is designed in such a way that, if successful, it can be transferred directly to continuous operation.