Siemens Turns to Hot Stones for the Energy Transition 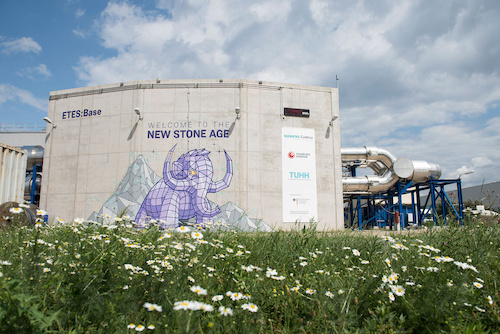 In Hamburg, a new stone age began just two years ago – the stone age of the new energy world. Siemens Gamesa Renewable Energy (SGRE) collaborated with Hamburg University of Technology and the utility Hamburg Energie on the FES Future Energy Solution project to ultimately inaugurate a large electric thermal energy storage system (ETES) in 2019. The system relies on 1,000 metric tons of Norwegian lava rock as a solid heat accumulating material with a thermal storage capacity of 130 MWh. The stones can store excess electrical energy from renewable sources of energy in the form of heat over several weeks nearly loss-free. This involves heating up air and blowing it into the storage system as a warm airflow until the stones reach a temperature of 750° Celsius.

Standard power plant technology is deployed to generate power from the heat. Steam from a steam generator powers a turbine to generate power. The durable system is designed with sustainability in mind given that volcanic rock is cheap and readily available around the world. Low-tech storage systems of this caliber can separate the generation and consumption of renewable energy integrate them into an existing infrastructure. Coal-fired power plants that are no longer in use could, for example, be converted into storage power plants. The fact that ETES enable the electrification and decarbonization of industrial processes makes them a useful solution for the energy transition. Siemens is planning even larger plants with a storage capacity of 2 GWh.

Further information about all nominated projects and products can be found here .

Alfen will supply EV chargers for its own business and British Gas‘ parent company Centrica.