Together with Messe München, we are working on a health and safety concept, which enables all participants a secure exhibition and conference participation.

Pioneering solutions to ensure the energy future have become more important than ever. Whether it is renewable power and heat generation technologies, innovative storage systems, smart grids, charging infrastructure or e-mobility: Promising solutions for renewable, decentralized, digital and reliable power supply and the coupling of the electricity, heat and transport sectors are conquering the market.

Ove Petersen, CEO at GP JOULE, shares his thoughts on 100% renewables for Germany

Ove Petersen is certain that Germany can switch to 100% renewable energy – and can do so quickly and affordably. In this interview, GP JOULE’s CEO explains the part that hydrogen plays in the transition, why it may make more sense to use the gas infrastructure instead of building new power lines, and how the system for charges should be reformed. 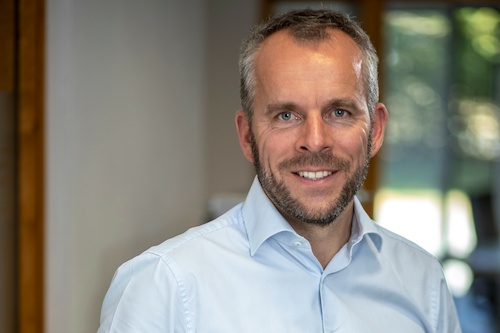 GP JOULE started an information campaign in September 2021. Among other things, the eFacts publications postulate that Germany can be supplied with 100% renewable energy very soon. How can this work? And what does “very soon” mean?

If we were to build nothing but free-field solar installations, supplying the whole of Germany with green solar power would take up 7% of the country’s surface area. This equates to the total of Germany’s sealed surface, or half of the land used for human settlements and the transport infrastructure. However, the actual surface required is considerably less than that, even if we were to additionally build small storage units, because we can make use of roofs.

Anyone who thinks that we need to import renewable energy today should first turn their attention to our existing roofs, which are already sealed surface areas. What’s more, installing a roof-top PV system does not require a complex approval procedure. Another advantage is that, as a general rule, where there are roofs, there is energy consumption nearby, which reduces the need for grid expansion.

So there is no lack of surface areas, then. But what does “very soon” mean?

Well, these surface areas are already available. What we need now is to speed up the approval process. In my opinion, we also need to give these types of technology a kind of privilege. To build an oil or gas-powered co-generation power plant, utility companies do not currently require a building permit, which means they have a privilege.

But what about renewables? Even a small solar installation requires a change to the land use plan and a building permit. We need to modify the building code, and then we can achieve 100% renewables by 2030. If we raise the bar for expansion goals, beyond the promises made by politicians during the election campaign, we will be able to add 20–30 GW of solar energy per year. Solar and wind energy are the pillars needed to make sector coupling, e-mobility and power-to-gas a reality.

There is still the issue of energy distribution. According to GP JOULE, decentralization plays an important role. What could the grid of the future look like?

People keep talking about decentralized grids, but what’s even more important is that the generation of energy is decentralized. For example, the costs of building a wind turbine in North Friesland are almost the same as for a wind turbine in Bavaria – the main difference being that the yield in Bavaria will be slightly lower. But at the same time, we can save money if we don’t need a – very costly – power line to transport the wind energy from North to South Germany. That is why we should consider expanding wind energy in the South, too, or generally deploying solar energy in a decentralized fashion. This will save grid expansion costs and will stop electricity prices and grid charges from rising further.

SuedLink was started over ten years ago, and still only has a 4 GW power line. Measured against our expansion goals, this is negligible. That is why we have proposed using some of the existing gas infrastructure.

That’s right. 80% of our energy demand is geared towards being met by molecules, rather than by electrons. Of course, the demand for e-mobility and heat pumps will be largely covered by electrical energy. But at least 60% of the energy demand for industry and heavy road traffic will have to be covered by energy based on molecules. This is where hydrogen comes in. It can bridge the “dark doldrums” and decarbonize those sectors that cannot be served with electrical energy alone. And hydrogen also offers maximum flexibility in the power grid. Hydrogen can provide time- and performance-related energy – something direct electricity supply without storage cannot offer.

You mentioned using the gas infrastructure. Wouldn’t it be much too time-consuming to convert the existing gas lines?

No, natural gas networks can actually be converted for hydrogen applications really quickly. On top of that, there is an initiative for the construction of new hydrogen lines in Germany. As a matter of fact, planning and building a hydrogen or gas line is much quicker than an electricity line.

Let’s go back to the SuedLink example: For a 4 GW power line, a kind of second highway had to be built along the A7 in Germany. That type of thing is a massive project. In contrast, at 45 GW, a natural gas pipeline has ten times the capacity of a power line. If we truly wish to achieve significant CO2 reductions by 2030, we have to act fast. Using the existing infrastructure saves valuable time.

How much electrolysis capacity do we need to ensure supply?

Various studies have come to the conclusion that Germany will need hydrogen generating installations with a total output of around 80 GW in order to cover the demand of industry, heavy goods transportation and heating, and to bridge any “dark doldrums”.

One of the main arguments against hydrogen is the alleged low efficiency. At your eFarm project in North Friesland, which is Germany’s largest hydrogen mobility project, electrolysis exceeds 95% efficiency. How does this work?

Our eFacts campaign is trying to do away with the prejudice that hydrogen generation is terribly inefficient. Electrolysis does not waste any energy: 75% of the energy input is converted into hydrogen, 25% into thermal energy. At 60–70 degrees Celsius, the resulting low temperature heat can be fed into a local heating network, and that is how we achieve an efficiency of more than 95%.

Your eFacts also discuss the network charge system. What needs to change for a better integration of renewables?

In the past, whenever wind or solar systems produced too much power, their output was reduced. This isn’t all that smart. There still aren’t any incentives for large consumers to shift their consumption to those times when the wind blows and the sun shines. What actually happens is that those consumers who buy at least 7,000 full-load hours per year from the grid through a particular delivery point, and who consume more than 10 GWh per year, are not subject to grid charges. This is a relic from the fossil energy world, where it made a lot of sense. Today, it no longer does.

We now need flexible consumers, and this requires a certain degree of grid digitalization to bring clarity about how much electricity end consumers actually buy. Currently, this is still calculated based on Standard Load Profiles. This means that a utility company does not actually know how much electricity a single-family home consumes. Around 67% of households still have their consumption calculated using Standard Load Profiles. This is a method from the Stone Age. Instead of using digital meters to monitor consumption, consumption is estimated.

Political developments in recent months have demonstrated the need for a secure and independent energy supply for Europe. The success of the energy transition is linked to the accelerated introduction of a green hydrogen economy, in addition to the increased expansion of renewable energies.

One Ticket, Four Conferences: Immerse Yourself In The New Energy World at The smarter E Europe

What does the power supply of tomorrow look like? Which technological trends are dominating the industry? And which new business models are changing the face of the energy industry? Answers to these questions and more will be shared at the four conferences forming part of Europe’s largest platform for the energy industry, The smarter E Europe, on May 10–11, 2022.

Use the online application to book your booth comfortably.